#Brioni ambassador #BradPitt attended the 92nd #AcademyAwards where he received the #Oscar for Best Actor in a Supporting Role for ‘Once Upon a Time… in Hollywood’ wearing a bespoke black velvet dinner jacket, wool and silk black trousers, white shirt and black silk bow tie pic.twitter.com/7pBVuHJ5wa

The world held its collective breath every time Brad Pitt was nominated for an award.  His presence was palpable at the BAFTAs in London, and he didn’t even attend!  Would he turn up with Jennifer Aniston? How could he break her heart like that!?  Who was he dating? How did Angelina feel about the whole thing?  Was he spending enough time with his kids?

Whatever the case, it was a collective sigh of swoon from women and men the world over every time he made an appearance.  In the midst of global tragedies, tyrant rulers and fear of epidemic illness, he was the light relief that we all needed in this very troubled times. If this feeling could only be bottled!  Brad Pitt really is this era’s new King of Cool.  He just makes you feel better about yourself, your relationships, looking good, and having fun.. it’s no bad thing.  What a run he had, with the icing on the cake being The Academy Awards.

Brad Pitt the clever, brilliant and astute Movie Star, played the fool, stole our collective hearts and it was simply irresistible.

BRAD PITT IN HIS OWN WORDS
Accepting The Academy Award
Wow. Thank you, this is incredible, really incredible. Thank you to the Academy for this honor of honors. They told me I only have 45 seconds up here, which is 45 seconds more than the Senate gave John Bolton this week.   I’m thinking maybe Quentin does a movie about it, in the end the adults do the right thing.

That meeting with Jennifer Aniston at the Golden Globes that took collective breaths away!

This [holds up Oscar statuette] really is about Quentin Jerome Tarantino. You are original, you are one of a kind. The film industry would be a much drier place without you and I love the ethos you gave Cliff Booth. Look for the best in people, expect the worst but look for the best. Leo, I’ll ride on your coattails any day, man. The view’s fantastic. And to the rest of the cast and crew: big bad Bob Richardson, Robert Garcia, Richie, my man Mike Moh.
You know, I also want to say, you know, while we’re doing all this, it’s time we give a little love to our stunt coordinators and our stunt crews. Listen, I’m a bit gobsmacked. I’m not one to look back but this has made me do so and I think of my folks taking me to the drive-in to see BUTCH AND SUNDANCE, and loading up my car and moving out here, and Gina and Ridley giving me my first shot to all the wonderful people I’ve met along way, to stand here now: “Once upon a time…in Hollywood.” Ain’t that the truth. This is for my kids, who color everything I do. I adore you. Thank you. 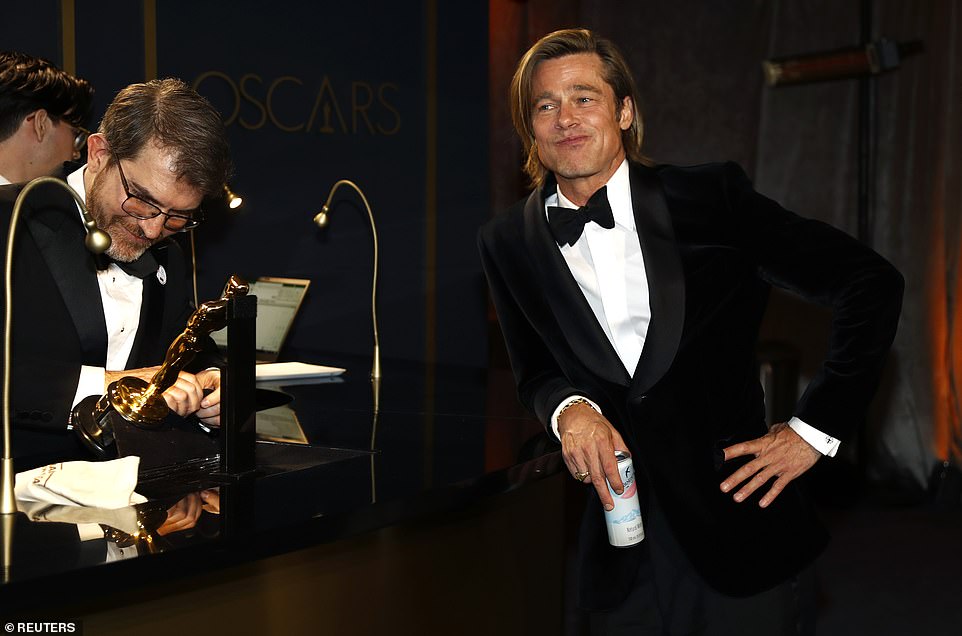 Q. What’s your Tinder profile going to say now?
A. (Laughs) You’ll just have to look it up.

Q. Some unkind souls have suggested you had a writer throughout the speeches this award season. Say it ain’t so.
A. What, no, actually, historically, I’ve always been really tentative about speeches, like, they make me nervous. So
this — this round, I figured if we’re going to do this — like, put some, like, some real work into it and try to get comfortable, and this is the result of that. No, I definitely write them. I have some funny friends. I have some very, very funny friends that helped me with some laughs, but, no, it’s, you know, it’s got to come from the heart.

Q. It’s been a pleasure for all of us watching you go up awards show after awards show this season and it will certainly be something that we all remember looking back. When you look back on 2020 and this awards season, what do you want to remember?
A. On 2020 awards season?

Q. Yes, this season, this year.
A. What do I want to — hell, if I know, man. I can’t even catch up with — you know, what do I — again, it was — for me, it was just about getting cozy, you know, up in front of a mass of people. I know that sounds antithetical given the profession I’ve chosen, but it’s not necessarily my thing. So that’s probably what I’ll remember.

Q. Brad, as referenced earlier, you had a lot of humor in your previous speeches this season, but tonight you did have your — a political reference. What kind of prompted you to go that way?
A. I was really disappointed with this week. And I think when gamesmanship trumps doing the right thing, it’s a sad day and I don’t think we should let it slide. And I’m very serious about that.

Q. You mentioned your kids in your acceptance speech and Quentin Tarantino said that your son Maddox delivered one of the best film reviews he’s ever heard. So what’s his review of ONCE UPON A TIME IN HOLLYWOOD?
A. I’m going to keep that — I just keep that to the — I keep that — that’s like — I just keep that indoors.

Q. How are you going to celebrate with your kids?

Q. Congratulations. You say this was dedicated to your kids. What would you say to them if they want to become actors? Would you let them do it and what would be the advice that you would give them — to them.
A. We can have that conversation if — once they are 18. And then I — listen, I want them to follow their bliss. You know, follow their passions, whatever — whatever they are most interested in. And then it’s — then I think it’s about, you know, guiding as you can. But they get to try everything on and find what — where their passion lies. So, sure, why not?

A. Well, no. I hope not. I hope I got other shit going on. But it has been a really special — really special run. And, again, it’s a community I love and friends that I’ve made over, you know, 30 years and they mean a lot to me, truly. And I feel a responsibility to that more than anything, more than, like, a victory lap. And so I think, like, right now I’m just looking — I think it’s — I think it’s time to go disappear for a little while now and, you know, get back to making things.